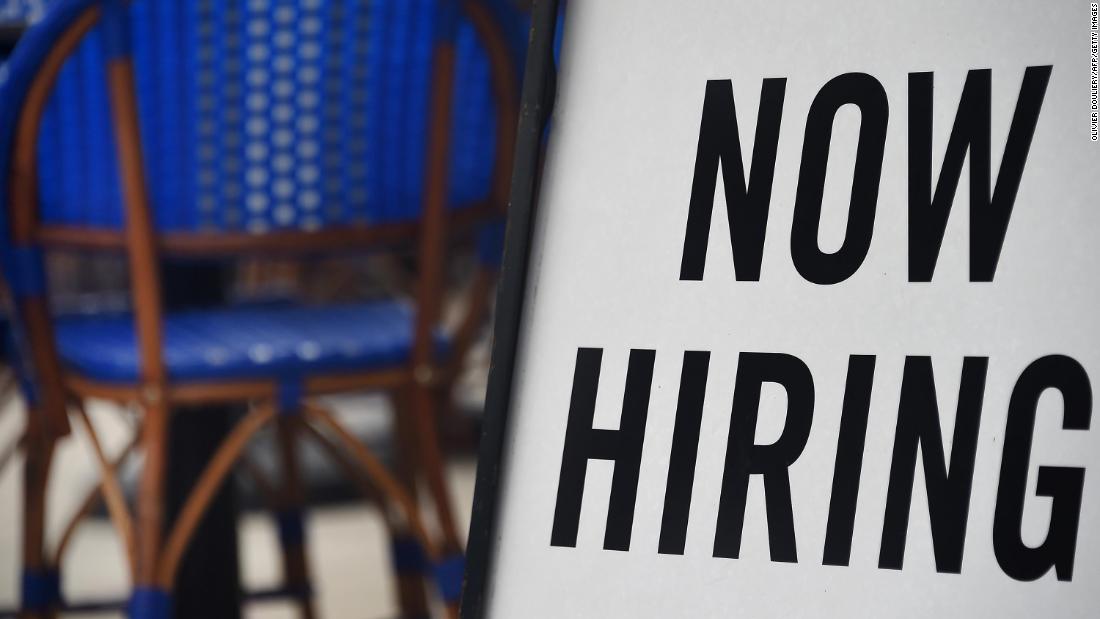 While some experts feel this will give workers a push to jump back into the labor force, some advocates fear that it may lead to many struggling residents losing their benefits, risking their health or taking jobs that don’t fit their needs.

“This is just not a time to put an additional requirement on people,” said Sue Berkowitz, director of SC Appleseed Legal Justice Center, which works with many unemployed South Carolina residents. “It’s going to lead to chaos, and we’ve been in chaos for a year.”

Millions are still out of work

More than a year into the pandemic, the economic recovery has picked up speed. Employers added 916,000 jobs last month — the largest gain since August — and the unemployment rate fell to 6%. Several hard-hit sectors, including restaurant and bars, saw big improvements.
Still, the US economy has 8.4 million fewer jobs than it did before the pandemic began. And 4.2 million people — or 43% of the unemployed — have been out of work for at least six months, which makes it harder for them to land new jobs.
To address this, President Joe Biden last month signed a $1.9 trillion recovery package, which provides a $300 weekly boost to jobless benefits and extends two key pandemic unemployment programs until early September. The Pandemic Unemployment Assistance program provides benefits to those who cannot work because of Covid — for instance, if they are in vulnerable health or have children whose schools have closed.
Also, the Department of Labor recently issued new rules that allow claimants to remain eligible for benefits by self-attesting that the job offered does not meet Covid-related safety standards, such as mask wearing, physical distancing or provision of personal protective equipment.

Connecting the jobless to new employment

Since unemployment benefits are administered by states, officials in each state can determine whether job searches should resume or remain suspended based on economic and public health conditions, said Oren Cass, executive director of American Compass, a conservative think tank.

“This isn’t last April, where the idea of saying, ‘Why don’t you have a job?’ would have been ridiculous,” Cass said.

Last month, certain jobless North Carolina residents had to start searching for work or participate in reemployment activities, under an executive order issued by Gov. Roy Cooper, a Democrat. It applies to those signing up for state or federal benefits for the first time or who are filing new claims because they are starting a new benefit year.

For now, up to two out of three weekly work search contacts may be satisfied through taking skills courses, attending career fairs or engaging in other activities offered by an NCWorks Career Center or a partner group. The state’s unemployment rate was 5.7% in February.

“More jobs are being created as we begin to emerge from the pandemic, and people who are out of work need help getting them. Unemployment payments have been critical for families and we want them to have jobs before the payments end,” Cooper said.

Idaho Gov. Brad Little, a Republican, has reinstated pre-pandemic work search requirements for all jobless residents receiving benefits starting April 25, unless they are returning to full-time work with employers within 16 weeks of the dates they filed for benefits or are active members of unions that refer members to jobs. The unemployment rate there is 3.3%.

Certain laid-off Nevada residents will have to start searching for employment on May 1, though the state has one of the nation’s highest unemployment rates, at 8.3%.

And many jobless in South Carolina, where the unemployment rate is 5.2%, will have to complete two weekly job searches in an online portal to maintain their eligibility starting April 18.

“Over the past several months, we have communicated on a regular basis with unemployment claimants about job openings and the benefits of a job and medical coverage over unemployment. Now, we see that we will have to do more,” said Dan Ellzey, executive director of the state Department of Employment and Workforce, noting that South Carolina has 125,000 residents drawing benefits and 87,000 open positions.

She and other advocates fear that states can’t handle adding a new requirement at this time.

“This will put more strain on already-strained agencies,” Tapia said.

What it means to people on benefits

Chalyce, the mother of a preschooler who lives in Belton, South Carolina, agrees that the jobless should search for work — but she’s concerned that her efforts may not be recorded properly in the state portal, which she said is not easy to navigate, especially with just a cell phone. She can’t afford to miss a week of benefits, which she uses for necessities, including gas to look for employment.

“It may not work when I need it to work,” Chalyce said of the portal. “That’s money we rely on to search for work.”

Chalyce, who asked that her last name not be used so it doesn’t hinder her employment prospects, used her latest stimulus funds to buy a computer to make it easier for her to look for work. She lost her job at a fabric weaving factory last summer but hasn’t gotten further than a handful of interviews.

While the state portal has some good job listings, she said, many others are very far away from her home, pay less than she used to make or were posted long ago. And she can’t take night shifts since she has no one to watch her young daughter.

Reinstating work search requirements will result in many jobless South Carolinians losing benefits, said Berkowitz, noting that most people who can work do. The state agency already has trouble handling claims and answering applicants’ queries.

“Why would they flip on something new, when they can’t even handle this ongoing problem?” she said. “Their system can’t handle it.”

South Carolina’s Department of Employment and Workforce did not return a request seeking comment.

For others who are waiting to be called back to their jobs, the work search requirement may not prove helpful either for them or for employers who need people eager to work long term.

Tim Liss, a furloughed bartender in Las Vegas, expects to return to the job he loves in coming months and doesn’t want to be forced to apply for positions that he would be in for only a short time. Plus, he’s worried he could take an opportunity away from someone who really needs the job to support themselves and their family.

“I’m sitting on my computer, filling out applications for positions that I don’t intend to take,” he said. “I’m not just wasting my time, but I’m wasting employers’ time.”

Georgia’s New Law, and the Risk of Election Subversion

Apprehensions at Border Reach Highest Level in at Least 15 Years

Restaurant inspections drop during the pandemic

Sharpton and Crump warn that the ‘world is watching’ as witnesses begin to testify.

Analysts get bullish on Facebook and Twitter, but trader warns of one headwind coming to a ‘boiling point’