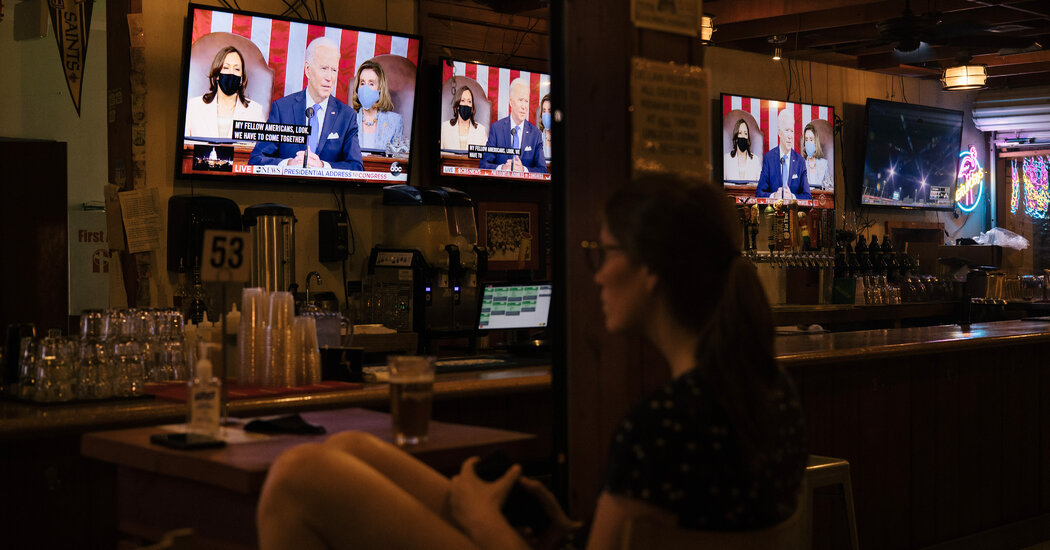 Nearly 27 million people watched President Biden’s first formal address to a joint session of Congress on Wednesday night, a large audience for television these days but a much smaller audience than similar speeches by other presidents, according to data from Nielsen.

Shown on all major networks and cable news channels starting at 9 p.m. Eastern time, the speech attracted a much larger television audience than Sunday’s Oscars telecast on ABC, which was watched by about 10 million people. But the audience was significantly smaller than the one for President Donald J. Trump’s first formal address to Congress in 2017, which drew 48 million viewers.

The television audience for Mr. Biden’s address also fell shy of those for equivalent speeches by other recent presidents. Barack Obama had an audience of 52 million in 2009; George W. Bush drew 40 million in 2001; and Bill Clinton’s first address was watched by 67 million in 1993.

Several factors contributed to the smaller ratings. Because of public health and security concerns at the Capitol, Mr. Biden’s speech came later in his presidency than those delivered by his recent predecessors, which all took place in February. There was also less pomp on Wednesday. Instead of an in-person audience of 1,600 senators, Supreme Court justices and other dignitaries seated cheek by jowl with House members, only 200 people were present because of social-distancing restrictions.

TV ratings, in general, have sunk in recent years, as more people have dropped cable subscriptions in favor of streaming, a shift that was accelerated by pandemic viewing habits. And the number of people watching television in the spring, compared with the winter, tends to be smaller.

The Fox audience came out in force for the post-speech analysis by anchors and commentators and the Republican rebuttal from Senator Tim Scott of South Carolina. In the 30 minutes after the address, Fox News was the only network to have a surge in viewers, with an average of 3.2 million people tuning in.

The analysis of the speech varied depending on the network. The Fox News contributor Ben Domenech called Mr. Biden’s speech a “tissue of lies.” On MSNBC, the anchor Brian Williams hailed it as “Rooseveltian in size and scope.”

The Vaccine Liberation Movement Gets a New Ally

Coinbase soars in the first public listing of a major cryptocurrency company.

A $1.2 Million Bank Error Buys a House, and an Arrest, Officials Say

And the Oscar Goes to … a Film From a Video Game