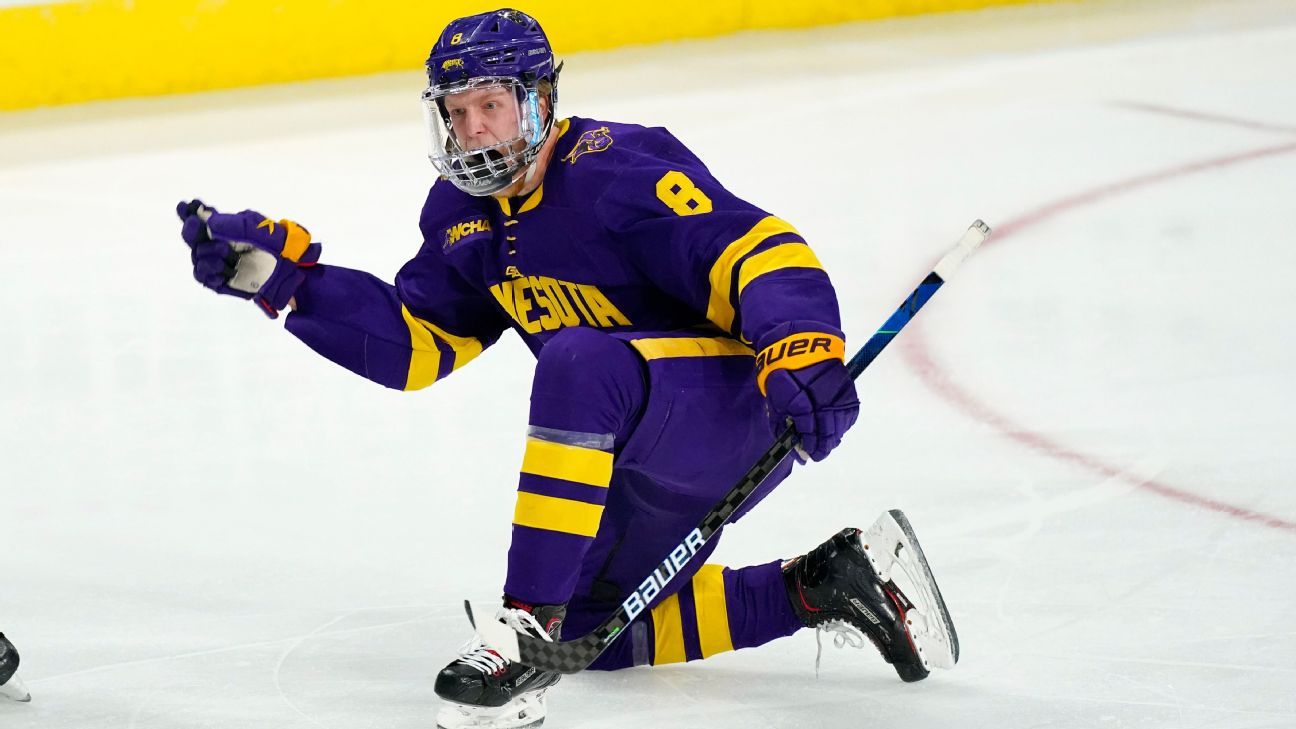 It was 1:30 a.m. Monday night/Tuesday morning as I exited the normally congested 68-year-old Squirrel Hill Tunnel and began the short, solitary dive into downtown Pittsburgh ahead of the 2020-21 Frozen Four. I had taken this route from the town of Indiana, Pennsylvania, many times as a child in a Ford Galaxie 500 with my dad going to Penguins, Steelers and Pirates games. My first dream: to be on the field playing. The second dream: to be in the broadcast booth calling big sporting events.

Now, in my Ford F-150 pickup driven from New England, the South Side Slopes of Pittsburgh were to my left offering a comforting dark shield with only streetlights and porch lights keeping it from being an imposing pitch-black wall of snores. On the truck’s speakers, the iPhone shuffle play randomly produced Anson Seabra’s lovely, whispering cover of “Can You Feel The Love Tonight.” I smiled. I was home, and Frozen Four week had begun.

College hockey will crown a national champion Saturday night on ESPN and the ESPN App (7 ET). We hope. Because, as we have been reminded the past 13 trying months, there are no guarantees, as if there ever are. We can only hope the games will go on and there will be no cancellations to prick at the battered spirit of sadness and inconvenience. Just three more games to go.

What we do know is we will have a good storyline at the end of the 2021 men’s Frozen Four when the final horn sounds Saturday night in Pittsburgh. We will have either a three-peat champion or a first-time winner. The last time the NCAA hockey champion was crowned in Pittsburgh, in 2013, we were guaranteed a first-time winner with UMass Lowell, St. Cloud State, Quinnipiac and Yale having qualified, with Yale taking home the banner.

Here are four short stories about the contenders looking to complete this long, strange trip to a winning conclusion.

St. Cloud State is back in the Frozen Four for the first time since 2013 (my first Frozen Four on the play-by-play). They are coached by former Minnesota Duluth Bulldog Brett Larson, who once augmented his late-1990s minor league hockey salary by playing summer roller hockey for the Orlando Jackals, among other teams. His current team lost its best goal scorer, Easton Brodzinski, to a season-ending injury in the East Regional. Losing players who have proved they can score is an uncomfortable development at this Frozen Four. Again, there are no guarantees in life, never have been, but this Frozen Four seems destined to be close and low scoring. The Huskies will need to find someone to light that lamp to get by defensive juggernaut Minnesota State in semifinal game No. 1.

The Minnesota State Mavericks are a purple and yellow uniform delight. Their coach, Mike Hastings, is a ball of intensity who coaches hard and sweats the small stuff. He preaches “the ground game.” Life is hard and hockey is hard, and that’s the way Mike Hastings likes it. He has honed his style to fit the player as all smart coaches have done as people and life constantly change.

The Mavericks are built on having the puck more than opposing teams and keeping the puck out of their net — a net protected by a goalie named after Ken Dryden, and Dryden McKay has done just that. He is 75-14-4 in his three-year college career. The only person who might not raise their eyebrows at that gaudy record is Dryden himself. In his three years at Cornell in the late 1960s, Dryden went 76-4-1 with a national championship. McKay has 24 career college shutouts. The NCAA record is 26 by Ryan Miller.

UMass was riding high after reaching its second straight Frozen Four. The Minutemen lost in the 2019 title game to Minnesota Duluth, a team they will meet again this year in semifinal game No. 2. But starting goaltender Filip Lindberg and leading goal scorer Carson Gicewicz will not play Thursday due to COVID-19 protocols. Forward Jerry Harding and goaltender Henry Graham have also been ruled out as a result. Is this the inevitable end of UMass this season with too big of a Bunker Hill to climb? Or is it part of an unforgettable season with an unforgettable ending for the Minutemen? Part of the fabric of 2020-21? This is the uncomplicated part of sports we love in an ever-growing complicated world; it’s either one or the other.

For the Minnesota Duluth Bulldogs, Frozen Four life has not been complicated. They just continue to skate to the championship game year after year. They did it in 2017, 2018 and 2019, and after the canceled 2020 Frozen Four, they could now return to the championship game for a fourth straight time. They lost in 2017 to Denver, but a win in Pittsburgh would give them three straight titles. That is implausibly impressive in this landscape of growing parity with a deep player and coaching pool.

The secret sauce of UMD’s success might reside on the outdoor rinks of nearby Hermantown, Minnesota, population around 10,000. There, the boys and girls can skate to their heart’s and mind’s content — free of coaches’ whistles, cone skating and learning cluttering systems. Current Bulldog Cole Koepke, a Tampa Bay Lightning draft pick, grew up on the magical outdoor playground rinks of Hermantown, one of many Division I talents forged in this tiny Duluth suburb. All Koepke has done in his Bulldogs career is win rings, and he’s going for three-for-three.

Minnesota Duluth freshman Luke Mylymok scores in the fifth overtime to send the two-time defending champions to the Frozen Four.

Bulldogs coach Scott Sandelin knows the magic of Hermantown — his son Ryan grew up playing on those rinks, too. And after developing into a Division I talent, Ryan decided he did not want to potentially complicate the father/coach-son dynamic, so he matriculated to Minnesota State in Mankato, setting up a possible father vs. son national championship matchup if Minnesota State and Minnesota Duluth both win Thursday night.

At first glance that might seem like a complicated moment for wife and mom Wendy Sandelin, but anyone who’s been married and has children knows it’s actually an easy choice. Scott told me this week Ryan would be Wendy’s little Lion King Saturday night. No question.

We made it to the Frozen Four. To the great American city of Pittsburgh that helped build this country in the 20th century with its dangerous and hot steel mills filled with rough and tough immigrants and sons of immigrants. Today, the women and men of Pittsburgh help enhance and save lives with the city’s extensive and high-level health, research and engineering networks. It takes brains and brawn to build a great city. This weekend In Pittsburgh, it will take brains and brawn to win the 2021 Frozen Four.

It will be fast, tight-checking, intense, dramatic hockey. Overtime hockey looms like the South Side Slopes. Every inch of ice will be fought over. Every player’s and coach’s personal journey and story, whether it’s from Hermantown, Finland, western Canada, Orlando, Japan, Slovakia or the Jersey shore will play out on the 200-by-85-foot sheet of melting pot ice in downtown Pittsburgh.

Could a Norway boycott of the Qatar World Cup change the future of football? | Håvard Melnæs

‘For all of you’: Real Sociedad manager breaks into song after Copa del Rey triumph – video