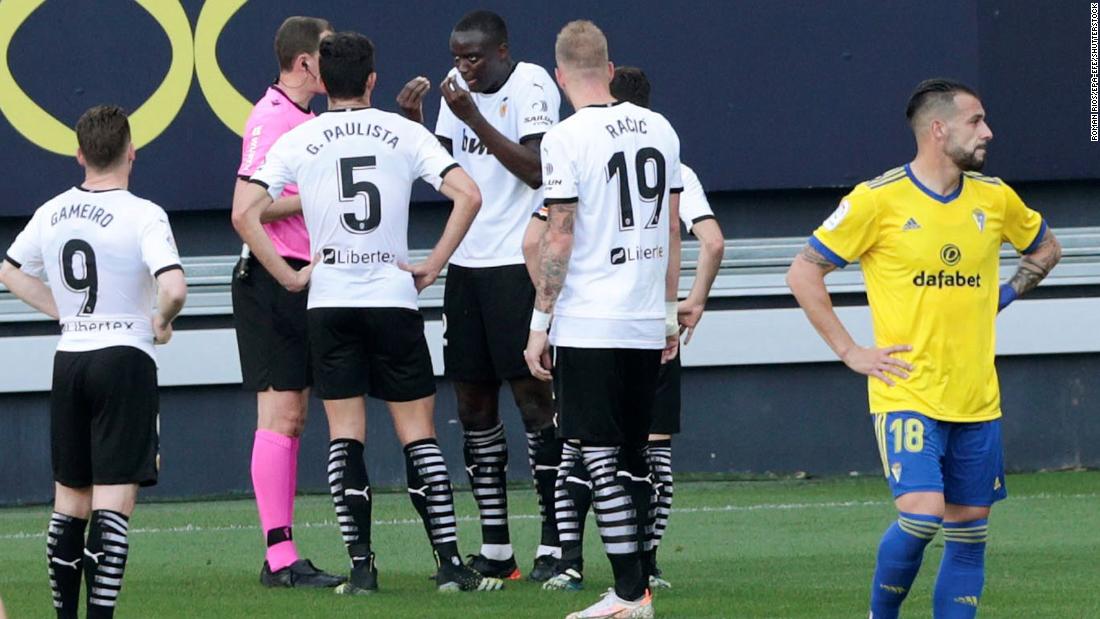 Stephen, 1 month ago 0 2 min read 27
“Following an analysis of all the elements available to La Liga, it can be concluded that no evidence has been found that player Juan Torres Ruiz (Juan Cala) insulted Mouctar Diakhaby using the alleged terms,” La Liga said in a statement on Friday.

La Liga said that it had analyzed all the audio footage from the game as well as images that were broadcast and shared on social media.

The league added that it had hired a specialist firm to both lip read the conversation that took place between Cala and Diakhaby and study the players’ behavior.

“La Liga has shared these reports with the clubs involved and the relevant authorities so that they form part of the proceedings that are currently taking place,” it added.

Sunday’s game was suspended for 20 minutes after Valencia walked off the pitch in solidarity when Diakhaby said he was subjected to racist abuse from Cala, according to the referee’s report.

The report states that Diakhaby told the referee Cala had called him a “sh*tty Black,” but that the alleged incident “was not perceived by any member of the refereeing team.”

In a video of the match, Diakhaby appears to be angry following their exchange and followed Cala across the pitch, where he was eventually restrained by some of his teammates and opposition players.

As Diakhaby was led away, Cala could be seen covering his mouth with his hand as he spoke to his coach on the touchline.

The Royal Spanish Football Federation’s (RFEF) own investigation into the incident remains ongoing.

Valencia issued a statement responding to La Liga’s decision saying that, although no evidence had been found against Cala, it didn’t mean that the matter didn’t occur.

“According to the videos and audio available, the investigation cannot confirm ‘EVERY’ word that Diakhaby heard in the 28th minute of the game last Sunday vs. Cádiz. The fact that no proof has been found does not mean that the matter did not occur,” Valencia said.

“Valencia CF wish to highlight that LaLiga have carried out their own investigation, but that the club have by no means changed our opinion on what occurred in the game, and maintain our full support for Diakhaby,” the statement continued.

“Valencia CF consider it positive that conversation has begun to establish new protocols that are necessary to combat racism in football. We are proud of Diakhaby, our captains, our players, our coach and his staff for their reaction during the game against Cádiz,” the club added.

Cádiz told CNN: “We refer you to the statement sent out by La Liga.”

The Fiver | Walking in the footsteps of Ipswich, Derby, Cardiff and Kilmarnock

Moe Norman: The ‘Rain Man of golf’ who amazed even the greats of the sport