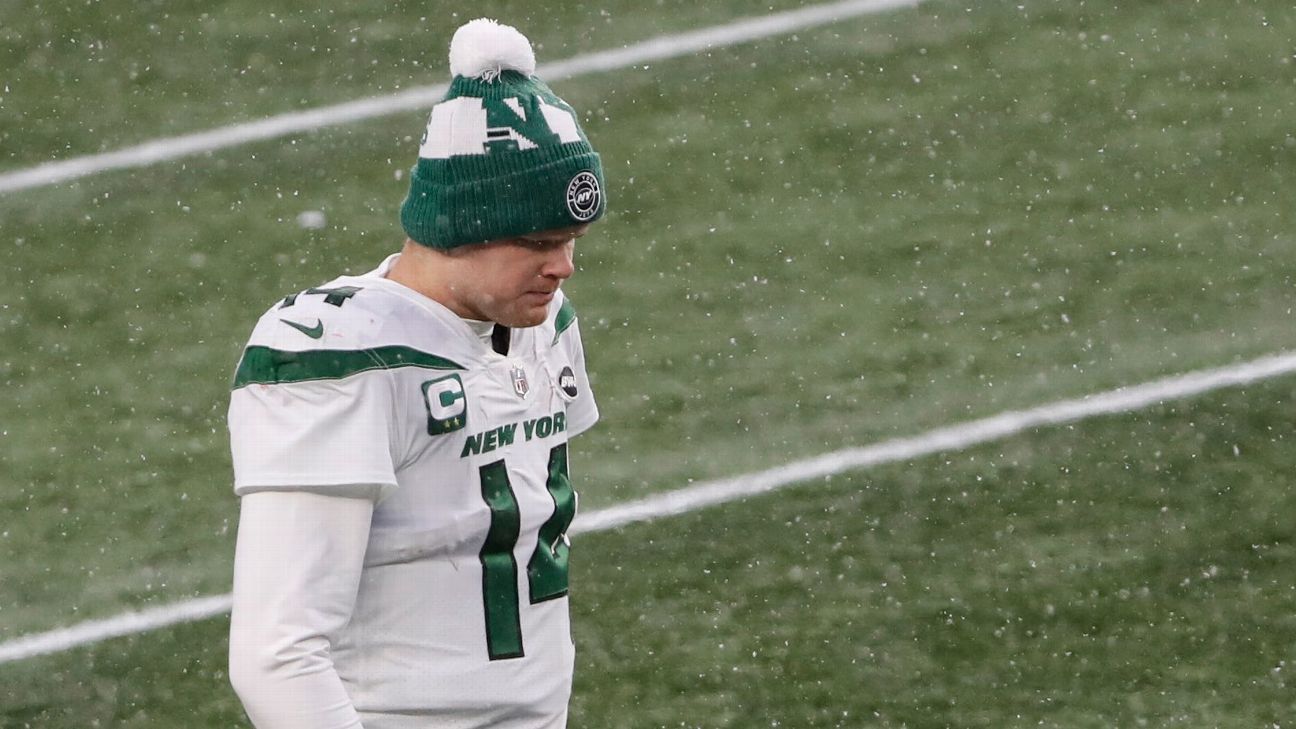 FLORHAM PARK, N.J. — After months of intense speculation and polarizing debate among fans and pundits, the New York Jets have arrived at The Decision — Part I, anyway. General manager Joe Douglas has decided to move on from quarterback Sam Darnold, who was traded Monday to the Carolina Panthers only three seasons into his pro career.

This was a difficult, multilayered decision, one that sparked debate within the organization. In the end, it feels like a mistake, a blown opportunity to cash in a winning lottery ticket.

The trade means the Jets are prepared to take a quarterback with the No. 2 overall pick in the 2021 NFL draft, probably BYU’s Zach Wilson, the Zac Efron look-alike with ridiculous arm talent who raised his stock with a fantastic season against one of the softest college schedules in the country.

It’s a gamble, one Douglas didn’t have to take. It’s mitigated somewhat by the return — the Jets received a 2021 sixth-round pick, plus second- and fourth rounders in 2022 — but they gave up on a 23-year-old quarterback whose progress was stunted by an organization that failed to supply him with adequate help. Darnold hasn’t played anywhere close to his draft status (No. 3 overall in 2018), but he’s not devoid of talent.

Not only did they send away a still-developing player, but the Jets lost out on a major score.

If the Jets had kept Darnold, they could have traded the second overall pick to a quarterback-needy team, bringing back a franchise-altering haul of draft picks. A trade would have allowed them to plug multiple holes, perhaps securing 2022 and 2023 first-round picks in the process. The risk of rolling with Darnold for another season would have been offset by the return in draft capital.

Instead of giving Darnold a chance to improve with better players around him and better coaching, Douglas decided to start over at quarterback. Coach Robert Saleh was in favor of keeping Darnold, sources said, but he apparently came around.

In the end, this was Douglas’ call. If he’s wrong about Wilson — or whomever he selects — Douglas will be out of a job when it comes time for the next do-over. He received a six-year contract in 2019, but this gig isn’t like being a Supreme Court justice. There’s no lifetime appointment; the Jets need to win.

Make no mistake, Douglas traded Darnold because he loves one of the quarterbacks in this draft and he didn’t love Darnold enough. There’s an outside chance he could trade the pick and take a different quarterback, but why do that? At this point, he has to be all-in.

Wilson is a highly skilled passer with playmaking ability outside the pocket — talent evaluators are ga-ga over him — but there are questions about his durability (shoulder surgery after his freshman year) and level of competition. He put up video-game numbers last season (33 touchdown passes, three interceptions), but he did it against “a cupcake schedule,” ESPN draft analyst Mel Kiper Jr. said.

“I said it all year: The sugar level has to be through the roof because he played so many cupcakes,” Kiper said.

Wilson struggled so much in 2019 that he had to reclaim his starting job in an open competition in 2020. That he wasn’t voted a captain by his teammates also raises a question, conjuring up memories of the fictional Bo Callahan in the movie “Draft Day.” To his credit, Wilson, eventually named a captain, responded with a brilliant season. But he didn’t play a single Power 5 school and faced only three defensive players listed in ESPN’s top 200 draft prospects.

No matter what, the Jets get to reset the financial clock by having another rookie-quarterback contract, a big reason why they opted to trade Darnold. They get a quarterback on the cheap through 2024, whereas Darnold’s salary would have ballooned in 2022 with a fifth-year option ($18.8 million) or an extension.

But what if the rookie doesn’t pan out? History tells us there’s a 50-50 chance he will bust. This also means another year of rookie growing pains for a franchise that hasn’t made the playoffs in 10 years, the league’s longest drought. The offensive line, the same five guys that stunk it up last season, is ill-equipped to protect Wilson.

No doubt, Douglas and his staff agonized over this decision for months. It was a tough call, nuanced by the lowered salary cap, roster-building philosophy and evaluations of the draft-eligible quarterbacks. As the Jets GM noted recently, “there are a lot of different scenarios and a lot of different rabbit holes we can go down.”

He made the decision. Right or wrong, Douglas will be defined by it.

And so ends another sad chapter in Jets history. Three years ago, they celebrated Darnold’s arrival. Now they couldn’t wait to get rid of him.

In 2018, the Jets found a shiny new toy under their Christmas tree, but they didn’t read the instructions manual and wound up breaking it. Maybe he would’ve turned out this way under optimal conditions, but we’ll never know. That part is hard to reconcile. If Darnold lights it up with the Panthers, it will be yet another damning indictment of the Jets’ Way.

A final like no other: la Real, Athletic and the biggest Basque derby ever | Sid Lowe