Home > Sports > ‘I just came out of the ring with Evander Holyfield’: The day Augusta National and the Masters fought back 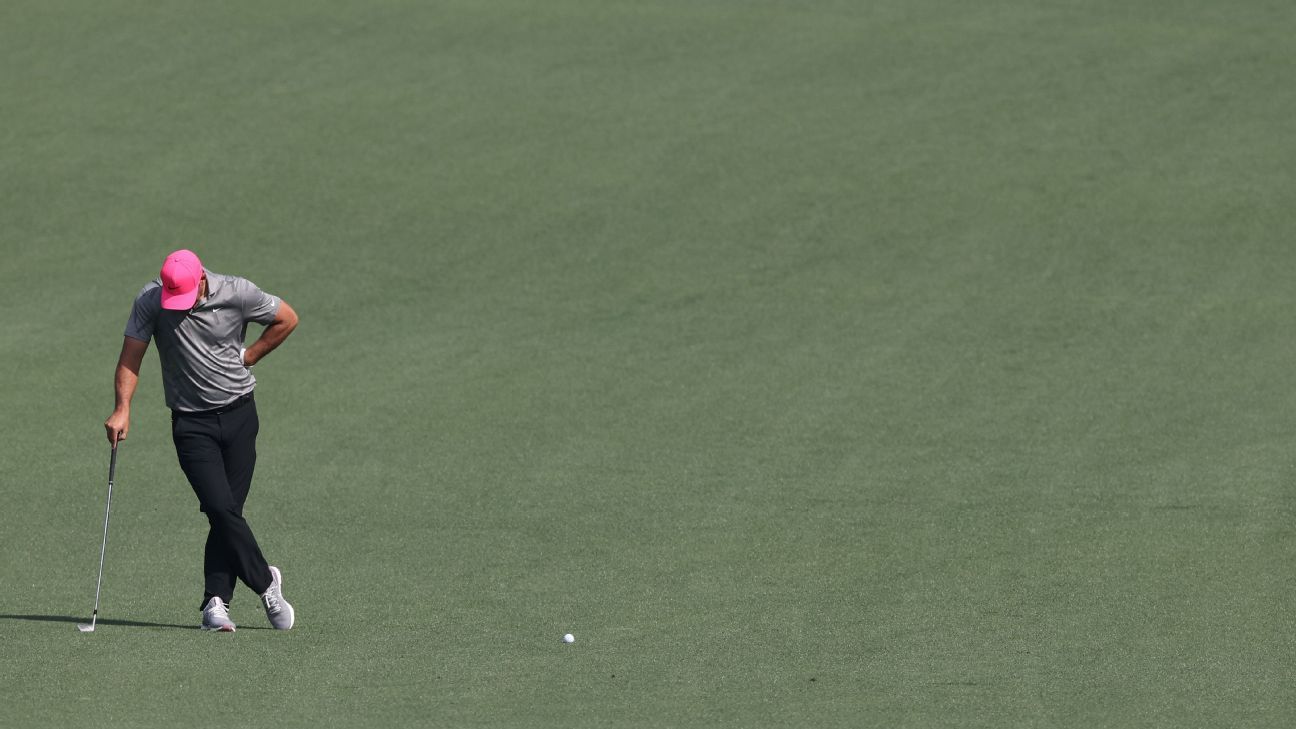 ‘I just came out of the ring with Evander Holyfield’: The day Augusta National and the Masters fought back

AUGUSTA, Ga. — This is the Augusta National that leaves you breathing fire rather than soaking in its beauty, spewing expletives rather than hosannas, and walking off bewildered.

Other than Justin Rose, who somehow shot 7-under-par 65 after not playing for more than a month, most of those who traversed the hallowed ground Thursday during the opening round of the Masters left battered, with egos bruised.

“I fought hard, but I feel like I just came out of the ring with Evander Holyfield, like a 12-round match,” said 2017 Masters champion Sergio Garcia, who shot 75. “I need to go home and rest.”

The Masters might not be quite back to normal — there are still COVID-19 restrictions and fewer patrons on site — but the course sure showed itself to be the challenging, beguiling beast that at times gives the best in the world fits.

And as expected, it was a far different test than the one presented in November, when soft conditions led to Dustin Johnson shooting 20 under, a tournament record.

In November, no player failed to break 80 during the opening round; there were five scores in the 80s on Thursday.

Another scoring clue? There were 12 scores of triple bogey or worse, including a 7 at the par-4 ninth hole by Jordan Spieth. (To Spieth’s credit, he played the back nine in 3 under to shoot 71.)

Making a score of 7 at the Masters typically does not translate to a green jacket. The last player to do so was Craig Stadler in 1982. Only four Masters winners in 84 previous tournaments have written a 7 on their card and collected the trophy.

Brian Harman and Hideki Matsuyama had to be feeling pretty good about themselves after shooting 69s. They still should. But it makes you wonder how Rose blew right by them to stand 4 strokes in front after a single round. There were 12 players under par, but just three posted scores in the 60s.

Among those who struggled were Johnson, who doubled-bogeyed the last hole for a 74; Rory McIlroy, who hit his own father, Gerry, with an errant shot on the way to a 76; and Bryson DeChambeau, who made just one birdie in a round of 76.

“I think it’s been five years, at least, from the last time I remember it being this firm,” said Webb Simpson, who shot 70. “But it’s fun. I think this golf course is more fun this way because you really have to think, you really have to use the slopes. You can put yourself in some really bad spots.”

Simpson’s idea of fun is not for everybody. Bernd Wiesberger had 40 feet for eagle at the par-5 15th, hit a putt toward the hole, then saw it trail off … and roll into the water fronting the green. He dropped in the same spot and two-putted for bogey. Shane Lowry also saw the difficulty of the 15th, chipping into the water from over the green. That hole typically plays as one of the easiest at Augusta National — it did yield three eagles and 30 birdies. But there were also four scores of double bogey or worse and 16 bogeys.

“It’s my 10th year here, but I’ve never seen the greens so firm and fast,” Matsuyama, who shot 69, said through an interpreter. “So it was like a new course playing for me [on Thursday]. I was fortunate to get it around well.”

Asked if he felt the greens were too severe, or if perhaps those in charge needed to do something to rein them in a bit, Matsuyama chuckled.

“That’s a tough question,” he said. “Please ask everybody else.”

“It can get pretty dicey out here if you put it in the wrong spot the way these greens are,” said Koepka, who shot 74. “Maybe late Sunday afternoon you see them this firm. Monday [during practice] it kind of looked like what it does normally on a Saturday, late Saturday afternoon, Sunday.

Koepka wouldn’t say it has gone too far. He also acknowledged there is some rain in the forecast and that could help.

“But I don’t think grass is going to grow on No. 9 overnight,” he said.

It’s far different from how things were in November, when the conditions were almost too soft. Most players said you could throw out what they learned that week; that’s how much the change in seasons means.

Augusta has also seen a good bit of dry weather of late. It has not rained in more than a week, with cool, windy conditions over the weekend followed by warm, sunny days contributing to the crisp course the players have experienced during practice and the first round.

Grounds crew personnel were seen hand-watering several greens on Wednesday. Even that did not seem to have much impact.

Phil Mickelson talked about iron shots plugged into greens in November, which he called the course’s main defense. When the greens are not firm, the course loses its “respect,” he said.

That was certainly back on Thursday.

“It’s tough,” said Gary Woodland, who won the 2019 U.S. Open at Pebble Beach and shot 73 on Thursday. “I felt like I just got out of the ring with Mike Tyson, or somebody. It was brutal out there.”

Rangers moving on from Odor; Leclerc set for TJ

Could North and South Korea joint host the 2032 Olympics?