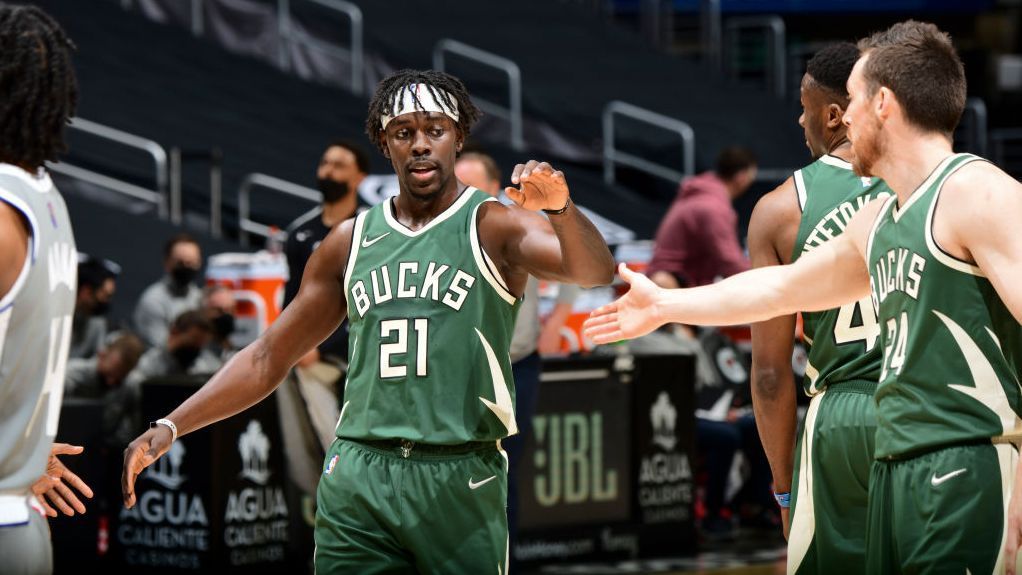 MILWAUKEE — Jrue Holiday says it was an easy decision to sign a contract extension in his first season with the Milwaukee Bucks.

Holiday pretty much knew he wanted to stay in Milwaukee for years to come once he spoke to team officials shortly after they paid a steep price to acquire him. General manager Jon Horst made it apparent how much the Bucks valued the veteran guard.

“I feel like you can tell when somebody’s like super excited or happy about something, and you could hear it in his voice,” Holiday said Monday, one day after agreeing to terms on a four-year extension that would be worth at least $134 million if he exercises his option for the final season. “At that point, I’m like, ‘Man, he really wanted me to be here.’

There are incentives that could push the total value of Holiday’s deal to nearly $160 million.

The 30-year-old said his teammates reinforced his desire to stay in Milwaukee.

“Not just on the court, but off the court, how my teammates, how they are, just great people,” Holiday said. “Made me feel like family. You want to be around them. You want to have that type of character around you and your family. They made it an easy decision.”

The Bucks acquired Holiday from the New Orleans Pelicans in November as part of a four-team trade.

The Bucks believe the 6-foot-3 Holiday has been worth the price.

“I don’t think you can kind of appreciate the strength and physicality he brings to both ends of the court until you get to see it night in and night out,” coach Mike Budenholzer said. “What he does defensively, takes on different matchups, different-sized guys, you hear about it and everybody talks about it and everything, so you have this expectation, but once you’re around it, it’s even more impressive.”

He has been an equally big contributor off the court. Holiday received an NBA Cares community assist award in January for his efforts to support people impacted by the pandemic.

Holiday agreed to his deal less than four months after the Bucks signed two-time reigning MVP Giannis Antetokounmpo to a supermax extension.

The franchise’s investment in Holiday, Antetokounmpo and two-time All-Star Khris Middleton — even without incentives — adds up to $105 million in 2021-22 and $113 million in 2022-23. That figure would reach $120 million in 2023-24 if Middleton exercises an option he has for that season.

Holiday believes that commitment should enable the Bucks to contend for years to come as they chase the franchise’s first NBA title since 1971. As the Bucks prepared to play at Golden State on Tuesday, Holiday compared Milwaukee’s situation to how the Warriors assembled their championship teams.

Oladipo staying in Miami to have knee evaluated

Gillespie back to Nova after injury; Samuels, too