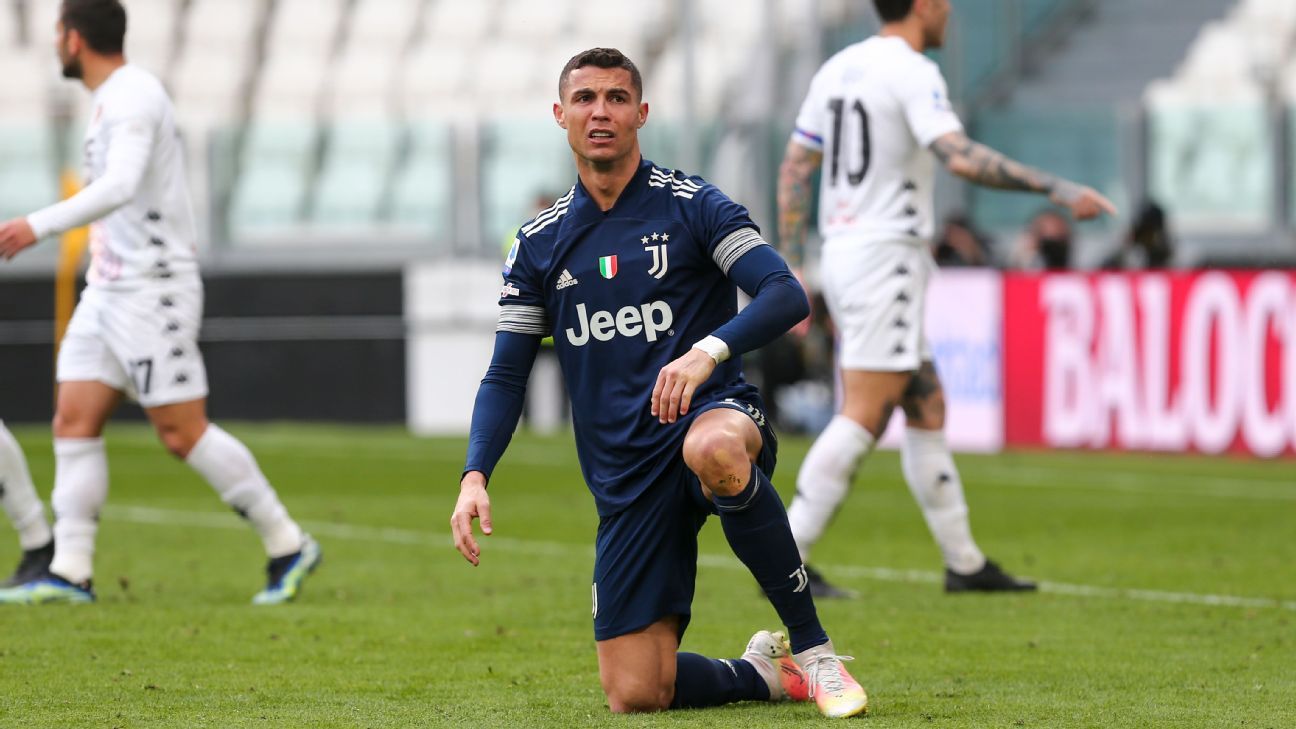 Forget the Serie A title: Juventus must beat Napoli to retain hopes of top-four finish

It’s not a surprise that maybe the biggest match of Juventus‘ season is taking place on the day of the Champions League quarterfinals. It is, however, a surprise that it’s a league match. With all Serie A teams already eliminated from Europe’s biggest tournament, it’s the perfect open date for a makeup game.

Napoli at Juventus, a Matchday 3 matchup, was originally awarded to Juve as a default 3-0 win when Napoli couldn’t make the trip due to coronavirus cases. But Napoli won an appeal, and it was rescheduled. It is the third time in three months that the two teams will meet — Juve won 2-0 on Jan. 20 in the Supercoppa Italia, and Napoli won 1-0 in Naples on Feb. 13 in Serie A play — and the consequences are adding up.

Juve’s 2-2 draw vs. rival Torino on Saturday dropped the nine-time defending league champs into a fourth-place tie with a surging Napoli that has won six of their last eight.

Serie A table as of April 6:

Seven teams have stood out from the pack in Italy all season (eighth-place Hellas Verona is 10 points behind Roma), but only six are guaranteed a spot in Europe next year, and only four are guaranteed the Champions League. An automatic spot has been considered a birthright for Juve in the modern era, but they’re under more stress than they’ve been in quite a while.

With Inter safe, FiveThirtyEight’s club soccer predictions give four teams a greater than 50% chance of claiming the three remaining Champions League spots — Atalanta at 80%, Milan 73%, Juventus 71% and Napoli 53%. Lazio’s odds have nearly doubled, from 10% to 18%, over the past month, too.

At least two of these teams will miss out, and a definitive loser on Wednesday could see their odds shift a good amount.

We’ve talked a lot about Juve this year, and for obvious reasons. The Bianconeri, which last failed to win the title in 2011, are in the process of attempting an overdue modernization and miniature youth movement. They’ve attempted to maintain constant winning while building for the future, and they’ve pulled off only the latter.

Manager Andrea Pirlo’s ultra-modern tactical view for the club has translated wonderfully at times and has made Juve quite aesthetically pleasing at times, but the roster isn’t where it needs to be for the approach to function fully. Ronaldo is scoring as much as he was brought in to score, but his presence places the burden of pressing on everyone else because (a) pressing has never been a major staple of his game and (b) again, he’s 36.

Meanwhile, the midfield bears a huge burden in buildup play, and that’s where most of the youth resides.

Saturday’s draw with relegation-threatened Torino told every story of the season in a single 90 minutes. With McKennie and backups Arthur Melo and Paulo Dybala suspended because of their participation in a party at McKennie’s house, Juve controlled long stretches of the match, producing 70% possession and 22 shot attempts worth 3.5 expected goals (xG) to Torino’s 10 and 1.2, respectively. Chiesa’s 13th-minute goal gave Juve an early lead, but they proceeded to fall asleep and briefly concede control of the match; Torino produced four of its 10 shots and 0.8 of its 1.2 xG in the 14 minutes after Chiesa’s strike until Tonny Sanabria officially tied the match with a put-back.

Juve re-established control from there, but thanks to another blip — Sanabria scoring again off of a careless Kulusevski turnover 15 seconds into the second half — a late Ronaldo goal salvaged only a draw, not an outright win.

Juve controlled 75 of 90 minutes, but the other 15 minutes were too calamitous to earn all three points. Pirlo mourned “lapses in concentration” and noted that “we make life complicated for ourselves” in a postmatch interview, and it appears vultures are circling Turin at the moment. With a loss to Napoli on Wednesday, Juve would officially fall out of the top four and despite the need to think long-term when hiring a first-time manager, it would shock no one if Juve panicked and made a managerial change.

Napoli’s season to date can be broken out into three sections.

Part 1 (Sept. 20 to Dec. 13): For the first three months of the season, they looked like title contenders. They pulled 24 points from their first 10 league matches, losing to Sassuolo and Milan, but dominating Atalanta (4-1) and Roma (4-0) and scoring at least two goals seven times. Following a 2-1 win over Sampdoria on December 13, they were three points back of Milan in second place. They had also outmaneuvered Real Sociedad and AZ to win their Europa League group, but injuries were about to take their toll.

Part 2 (Dec. 16 to Feb. 21): With expensive new acquisition Victor Osimhen already out with a shoulder injury, striker Dries Mertens‘ mid-December ankle injury was a major blow. He would miss a majority of the next two months. Osimhen would test positive for the coronavirus in early January, too, putting his recovery further on hold.

The injuries weren’t limited to the front line — defensive midfielder Diego Demme and goalkeeper David Ospina would both miss time in February, and fullbacks Elseid Hysaj and Faouzi Ghoulam would both battle COVID-19, followed by other injuries (a calf injury for Hysaj and a far worse ACL rupture for Ghoulam).

Dan Thomas is joined by Craig Burley, Shaka Hislop and others to bring you the latest highlights and debate the biggest storylines. Stream on ESPN+ (U.S. only).

The effects were predictable. Napoli continued to score thanks primarily to the work of wingers Lorenzo Insigne and Chucky Lozano, but the breakdowns at the back added up; they allowed 17 goals in 12 league matches and earned only 16 points to fall to seventh in Serie A. They also lost the Supercoppa to Juventus, fell to Atalanta in the Coppa Italia semifinals and got knocked out of the Europa League, 3-2 on aggregate, by Granada.

Part 3 (Feb. 28 to present): This spell is still ongoing, but the early signs have been encouraging. Beginning at the end of February, manager Gennaro Gattuso has shown a bit more caution. After racking up heavy possession numbers for much of the season, Napoli have averaged only 51% possession in their past six league matches; they’ve also allowed only seven goals in that span, scoring 15 and earning 16 of a possible 18 points.

Mertens and Insigne have each scored four times (Insigne has also created a team-best 20 chances), and Osimhen has scored twice in 181 minutes as well after returning from a head injury.

Ghoulam is out long-term and Demme (shin) and Ospina (finger) picked up recent knocks, but Napoli again look like a top team. And while Inter are starting to run away with the league title, Napoli are back to within four points of second place.

You could make the case that despite the presence of both Ronaldo and Inter’s Romelu Lukaku, Insigne has been the most valuable attacker in Serie A. Typically a facilitator, he was asked to shoulder a heavier scoring burden than normal in Mertens’ absence, and he’s the only player in the league — and one of only five in Europe’s “Big 5” leagues — to combine at least 14 goals with at least 40 chances created. The other four: Barcelona‘s Lionel Messi, Liverpool‘s Mohamed Salah, Manchester United‘s Bruno Fernandes and Lyon‘s Memphis Depay. Great company.

Insigne is also the avatar for the overall Napoli attack, one that combines volume with finishing skill. Napoli are first in the league with 0.19 shots per possession, and while the value of those shots is inconsistent (they are 15th in xG per shot), the shots find the goal mouth. Their 0.33 xGOT/SOT (xG for shots on target divided by total shots on target) ranks seventh, and beyond the advanced stats, only Inter and Atalanta score more goals.

They are one of the most efficient passing teams in the league, and no team in Italy advances the ball more with its feet — they attempt the most carries in Serie A, and four players (defenders Giovanni Di Lorenzo and Kalidou Koulibaly, pivot man Fabian Ruiz and, of course, Insigne) have attempted over 900 carries on the season. The defense has been inconsistent as the lineup has been shuffled, but Gattuso has figured out a way around that of late. (At least, he had before Saturday’s 4-3 track-meet win over Crotone.)

A third game to separate them

Despite both matches taking place in Napoli’s relative dark period, the teams split their two matches earlier in this calendar year.

Juventus 2, Napoli 0 (Jan. 20): In this match, Napoli simply had little to offer. Juve didn’t break a scoreless tie until the 64th minute, but they controlled the ball (58% while tied) and offered Napoli no quality chances. Napoli began only one possession in the attacking third to Juve’s 14, and Juve averaged 8.4 passes allowed per defensive action (PPDA) to Napoli’s 20.6. Andrea Petagna started for Mertens up front, but produced zero shot attempts in 72 minutes, and Napoli produced almost no quality chances, or chances of any kind, until already losing.

Napoli 1, Juventus 0 (Feb. 13): Napoli again ceded control of the ball, allowing 63% possession for the 30-ish minutes the match was tied and 62% for the game. Again, pressure favored Juve — they started 13 possessions in the attacking third to Napoli’s eight and averaged 9.1 PPDA to Napoli’s 17.7 — but while Juve outshot Napoli by a 3-to-1 margin (24 to 8), shot quality was lacking. Giorgio Chiellini conceded a penalty in the 31st minute, Insigne converted it, and Napoli bunkered in and survived, producing almost no scoring chances after that.

Gattuso has proven adaptable this season, dominating the ball one moment and bunkering in the next, depending on the opponent and game state. He elected to all but hand the ball to Juve and play off of that, and while Napoli are in far better form now than they were during these two matches, it would be a surprise if the formula changed all that much.

Gattuso’s not the manager we’ll be paying attention to, however. Pirlo’s vision of perfect possession football sounds wonderful, and odds are decent that, given enough time and continuity, he’d be able to establish a pretty accurate version of it in Turin. But Juventus cannot under any circumstances miss out on the Champions League. A win on Wednesday wouldn’t assuage those fears, but a loss would make them feel awfully real.

No first-rounder, no problem? Rams prepare for fifth draft without a first-round selection