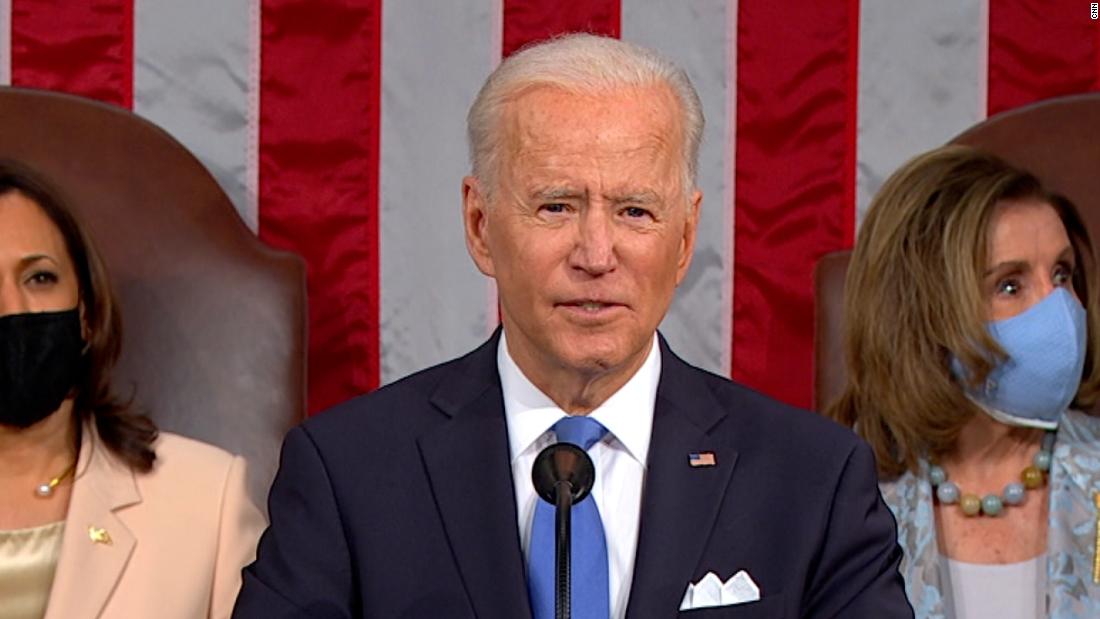 While Biden’s speech was, for the most part, factually accurate there were a few incorrect claims — notably at times when he went off script — and some that require context and explanation.

Biden repeated a claim he has made before about his relationship with Chinese President Xi Jinping. He said Secretary of State Antony Blinken “can tell you that I spent a lot of time with President Xi — traveled over 17,000 miles with him.”

Facts First: This is false. Biden has not traveled anywhere close to 17,000 miles “with” Xi, as Washington Post fact checker Glenn Kessler and then CNN noted in fact checks in February. While Biden could accurately say that he has spent many hours and held many meetings with Xi — they spent time together in 2011, 2012, 2013 and 2015 — Kessler noted that the two leaders often did not even travel parallel routes to their gatherings, let alone physically travel together. The only apparent way to get Biden’s mileage past 17,000, Kessler found, is to add the length of his flights between Washington and Beijing, during which, obviously, Xi was not with him.

A White House official told CNN that Biden was making “a reference to the total travel back and forth — both internally in the US and China, and as well as internationally — for meetings they held together. Some travel was in parallel, some was separately to joint destinations.” But that is very different from traveling “with” Xi, especially in the context of a point about how familiar he is with Xi.

Biden’s infrastructure plan and the economy

President Biden said that “independent experts estimate the American Jobs Plan will add millions of jobs and trillions of dollars to economic growth in years to come.”

Facts First: It’s true that some experts say the plan could create millions of jobs, but analysts differ on how much economic growth it could spur.

The American Jobs Plan proposes spending $2 trillion on improving the nation’s infrastructure and paying for it by hiking corporate taxes. Some independent analysts say it will have a positive effect on jobs and the economy — but the magnitude of its effect will depend on the size and structure of the package that Congress ultimately passes.

Moody’s Analytics found that the proposal would create about 2.7 million jobs by the end of 2030. A separate report from S&P Global noted that the jobs created by the plan could be temporary. It estimated that in the short term, $2.1 trillion in infrastructure spending could create 2.3 million jobs, but that as infrastructure projects are completed these jobs would taper off and the net jobs added from the proposal would be 713,000 by 2029.

Moody’s Analytics projects that the infrastructure plan will result in a higher GDP over the next decade. It predicts GDP will grow by 3.8% in 2024, compared with 2.2% if the plan fails to become law.

S&P Global also found that that much infrastructure spending would boost the economy over the next decade adding $5.7 trillion over that time period. It estimated that GDP growth will be lifted to 2.2% from 1.7% over the next 10 years.

But a different analysis from the Penn Wharton Budget Model took a longer-term view and found that the infrastructure proposal would actually end up decreasing GDP by 0.8% in 2050.

Facts First: While it’s impossible to fact check the impact of a plan that hasn’t even passed Congress, a forecast from Georgetown University Center on Education and the Workforce supports these figures depending on how “college degree” is defined. The study estimates that 85% of the jobs from the infrastructure plan would be filled by those without a bachelor’s degree, while 75% of the jobs would be filled by those without an associate’s degree, according to the estimate.

Many of these jobs would be temporary, as a study from S&P Global notes, estimating that the majority of jobs would taper off by 2029 as infrastructure projects are completed. It’s important to note too that studies and estimates around the infrastructure plan vary widely.

Again, this is just one forecast of the potential effects of a plan not yet passed by Congress.

President Biden said, “When I was vice president, the President asked me to focus on providing help needed to address the root causes of migration, and it helped keep people in their own countries instead of being forced to leave. The plan was working. But the last administration decided it was not worth it.”

Facts First: Biden didn’t specify the program, but it’s true that the Obama administration set up a program to provide safer pathways to the United States that was later terminated by then-President Trump.

During his tenure as vice president, Biden led diplomatic efforts in Guatemala, Honduras and El Salvador after a growing number of unaccompanied minors from those countries began arriving in the US in 2014. The Central American Minors program was among the efforts.

The program allowed children under the age of 21 with parents lawfully living in the US to seek entry into the country from their places of origin if they did not qualify for refugee protections but were still at risk of harm. It served as an alternative for parents who might otherwise turn to smugglers to bring their children to the US illegally. While it might not have helped “keep people in their own countries,” it was intended to keep them from being forced to try illegal, and dangerous, methods of immigration.

There are mixed reviews on whether the program “was working,” as Biden said, given the urgent situations some children were facing. In 2017, the Trump administration ended the program, making it difficult to assess its effectiveness since it had only been in place for a limited period of time.
The Biden administration has since announced it is restarting the program.

Facts First: While the numbers on vaccinated seniors that Biden cites are largely true, and his administration has made great strides in vaccinating Americans, Biden has benefitted from timing. When he took office in January, vaccines had only just been made available and some seniors were only newly eligible.

About 68% of people 65 and older are currently fully vaccinated, according to statistics from the US Centers for Disease Control and Prevention.
While it is true that less than 1% of seniors had been fully vaccinated when Biden took office, that’s in part due to the fact that two of the Covid-19 vaccines had been authorized by the US Food and Drug Administration for only a little more than a month.

In the US, the first person received a vaccination dose outside of a clinical trial on December 14 and Biden took office a little more than five weeks later on January 20. The recommended time between the first and second shot of the Moderna vaccine is 28 days and 21 days for the Pfizer vaccine.

After health care workers and those people who lived in long-term care facilities, people over the age of 75 were given top priority for vaccinations.

Biden said that 2 million women dropped out of America’s labor force during the pandemic, often “because they couldn’t get the care they need for their family, their children,” he added.

Facts First: Biden is actually understating the number of women who left the labor force during the pandemic.

Seasonally adjusted data from the Bureau of Labor Statistics shows that as of March 2021, there were 2.6 million fewer women in the labor force compared to February 2020, before Covid-19 took its toll on the economy. The government defines people who aren’t in the labor force as unemployed and not actively looking for a job.

Women have been hit harder by the pandemic in part because they account for a disproportionate share of workers in sectors that have been most affected by the pandemic, including hospitality and leisure.

In September of last year, when school started again after the summer and many children needed help distance learning, the number of women leaving the workforce was particularly high.

The employment-population ratio for America’s women stood at 52.8% in March, down from 55.8% before the pandemic but up from its low during the first wave of the pandemic when the economy ground to a halt.

Verizon sells Yahoo and AOL businesses to Apollo for $5 billion

‘No casino’ rally brings dozens of Richmond residents together: ‘We’re going to fight this all the way’

Claiming the Summit Without Reaching the Top

‘We must speak the truth’: Liz Cheney defiant ahead of ouster from top Republican job

As India resists calls for a national lockdown, one economist says states should decide

Ole Miss’ Hoglund having TJ surgery prior to draft