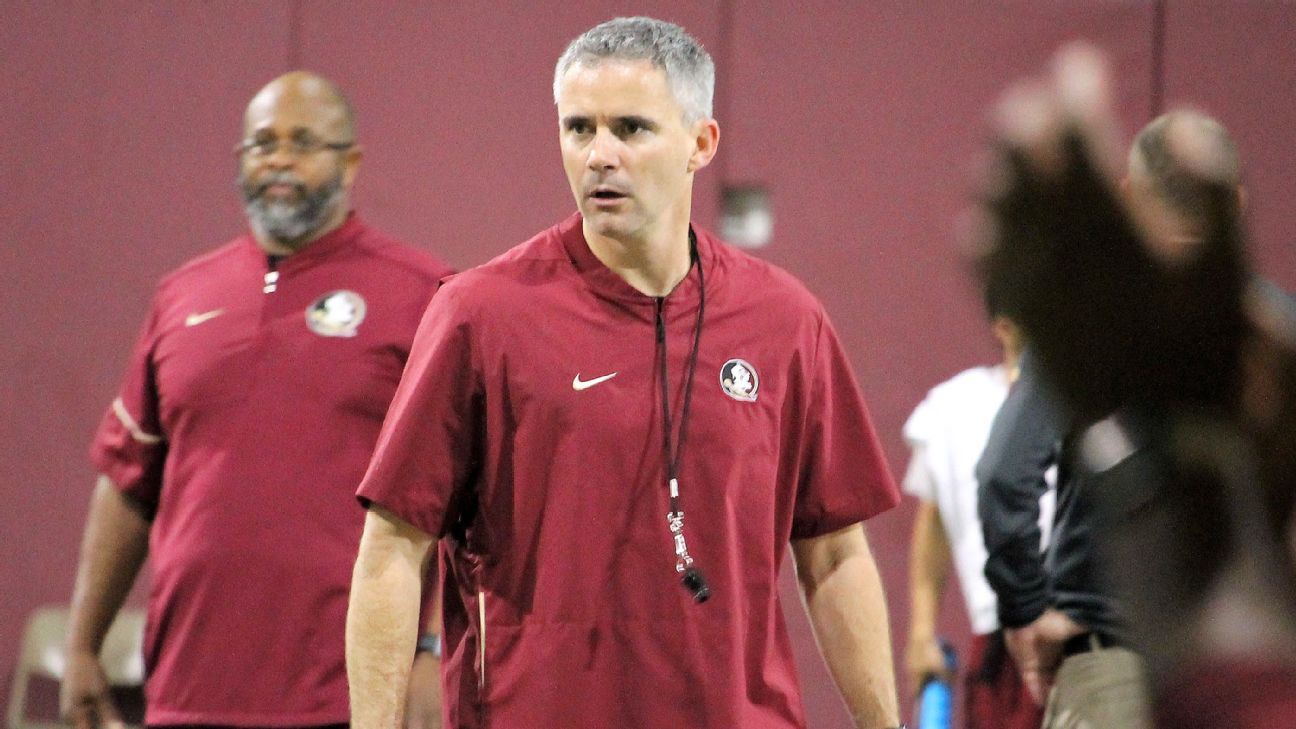 Football players, coaches and athletic directors in the state of Florida spoke out Thursday in opposition to a bill that would delay for a year the state’s plans to allow college athletes to make money from endorsements.

Miami coach Manny Diaz and Florida State coach Mike Norvell joined their quarterbacks, D’Eriq King and McKenzie Milton, in asking Florida Gov. Ron DeSantis to veto a bill that would press pause on the state’s pioneering name, image and likeness law. Diaz and others have spent the past several months preparing for what will be a significant shift in the college sports world. They said they were blindsided by the proposed change, which was introduced by an amendment to an education bill that was originally unrelated to sports.

“The way that it was slid through, watching the video the way it was read, it was almost casual, in passing,” Diaz told ESPN, referencing video of last night’s senate vote. “It is hard to understand the motivation. I think that’s probably the trickier part. The Governor has been on board with this the whole way, so we’ll see what happens.”

King, Miami’s senior quarterback, tweeted Thursday morning: “Don’t back down now. Let us profit off OUR name image and likeness. We deserve it!”

There is no reason to wait to do the right thing

The state of Florida was a leader on NIL and, as other states quickly tried to follow our model, college athletes in Florida have been able to position themselves to be ready to benefit starting July 1, 2021#KeepTheDate

Florida coach Dan Mullen also added his voice to the conversation, tweeting, “The state of Florida needs to enact NIL legislation in 2021, as was originally planned. We need to do what’s best for our student-athletes.”

The amendment was one of two last-minute additions to a bill that was originally focused on statewide charter schools. If signed by the governor, it will delay the implementation of a law that will allow college athletes to start making money from their names, images and likenesses while in school. The law was scheduled to take effect on July 1 of this year but could be pushed back to next summer.

The bill in question also included another amendment that would ban transgender athletes from participating in women’s sports in the state of Florida. State legislators declined to push through similar legislation earlier this month after the NCAA threatened to remove any future championship events from the state if it passed discriminatory laws. Sen. Travis Hutson, who authored both amendments this week, did not respond to multiple messages seeking comment about the motivation for both amendments.

DeSantis has previously expressed support for banning transgender athletes from women’s sports, which could make his decision on whether to veto the bill more complicated. The amendments, which were only very briefly debated on the senate floor, appeared to catch many lawmakers by surprise. Rep. Chip LaMarca, who authored the original name, image and likeness bill, said Thursday that he “could not be more disappointed” with the changes.

“Not only did our legislature go back and revive a questionable policy, but against all odds the Florida Senate stripped Florida of our leadership role that will empower student athletes to earn a living off their talent,” LaMarca said in a statement provided to ESPN. “In one move, the Florida Legislature made our state both anti-economic freedom and anti-student athlete.”

Florida is one of 11 states that have passed laws that will create new opportunities for athletes to make money from their names, images and likenesses while in college. When Florida’s bill was signed into law last June, it was the first state to set this summer as the starting line for when athletes would be able to start profiting from these deals.

DeSantis touted it as recruiting advantage for his state’s schools at a public ceremony to announce the new law in Miami’s indoor football practice facility. Miami athletic director Blake James shared a photo of that even Thursday afternoon in a Twitter post that also asked DeSantis to veto the bill.

Florida’s law initially provided pressure that caused several other states to pass laws with a July 1 start date. Alabama and Mississippi, home to schools that often compete with Florida for top recruits, both passed NIL laws in April. Georgia’s legislature passed a bill that is currently awaiting their governor’s signature.

The NCAA has been working on changing its rules for nearly two years and said last week that it remains committed to finding a uniform national rule for how players can make money in the future. Congress is also weighing multiple proposals for a national law. The July 1 date set by Florida and adopted by several other states has been the main source of pressure on the NCAA and Congress to act swiftly.

UCF athletic director Terry Mohajir told ESPN that he remains confident that the NCAA will pass new nationwide rules this summer, which could make Florida’s state law a moot point.

“In my mind, it’s not that big of a deal,” Mohajir said. “This is such a hot topic, it’s being passed by all the states, the NCAA is going to have to pass it.”

Lawmakers in other states with soon-to-be-implemented NIL laws told ESPN they were not aware of any efforts to press pause on their process. Coaches and athletes – especially those who are entering their final year of NCAA eligibility – remained confused, though, about the motivation for Florida’s late decision to reverse course.

“The NCAA & institutions don’t miss out on any of their money with an NIL law being passed,” Florida State senior quarterback McKenzie Milton tweeted on Thursday. “Just the athletes that we ‘care’ so much about..no biggie.”

PSG’s Champions League job vs. Bayern Munich only half-done. Can Mbappe & Co. finish it on Tuesday?

Dallas Cowboys’ focus for No. 10 pick in 2021 NFL draft: Which cornerback?

The lapsed fan’s guide to WrestleMania 37