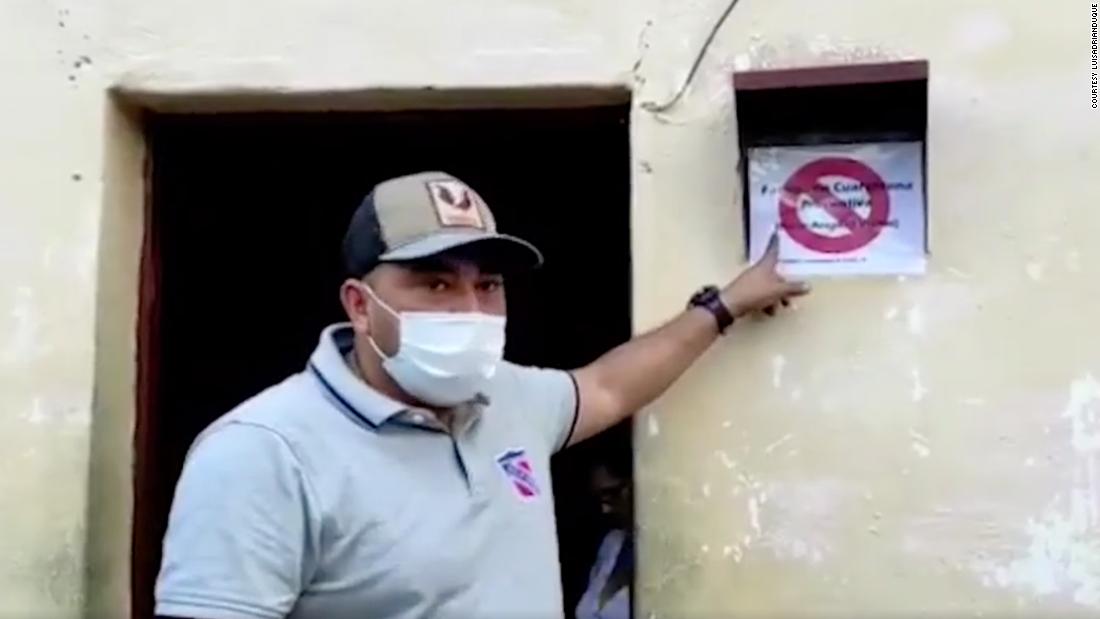 In a video posted on his official Instagram account on Tuesday, Mayor Luis Adrian Duque of Guama, a small village in the central Venezuelan state of Yaracuy, announced the measure as part of the town lockdown policy.

“We are protecting our people, [this sign] indicates a positive case or a potential case, so that people are aware,” Duque says in the video, pointing to a red prohibition sign placed on the window of a local house.

People caught removing the Covid-19 signs on their homes would be fined 10 million bolivars, a sum out of reach for many in Venezuela, where the minimum monthly salary is less than a US dollar. Those who were not able to pay the fine would be required to serve days of “voluntary” community services, Duque said.

A photo posted by mayor’s office in the neighboring city of San Felipe also showed local officers standing next to a similar “quarantine” sign. The photo, which touted Mayor Rogger Daza’s campaign against the coronavirus, has since been removed from social media.

Some users on social media commended Mayor Duque for taking a strong stance against the pandemic, which has piled stress on a health sector already damaged by seven years of economic crisis.

According to figures collected by the Venezuelan government, the country has reported a total of 169, 074 cases and 1,693 deaths. However, health officials and the Venezuelan opposition have questioned the government’s capacity to collect and analyze data, and warned the real number of cases could be much higher.

But criticism of the strategy was also fierce. Local Venezuelan NGO “Access to Justice” condemned the signs as harmful to the dignity of the patients, and a civil rights group in Yaracuy has called for a virtual protest on social media, since public gatherings are banned in Venezuela under lockdown rules.

Miguelangel Delgado, 33, of San Felipe, deplored the signs as a way of instilling fear. “People are afraid, there’s a lot of rejection towards this way of dealing with the pandemic, but there’s also a lot of fear to be singled out.”

Henry Narvae, 23, a local resident, told CNN the practice that such extreme containment measures were distraction from an actual lack of health services. “The only solution the authorities put in place is to limit the citizens without providing any assistance,” he said.

“Here in Guama, the Mayor has taken to mark houses and terrify the population with the military, which reminds me of the Nazis, while the town only has one ambulance to move patients,” he added.

Neither Duque nor Daza responded to CNN’s attempts to contact both mayors by phone and messages. A spokesperson from Yaracuy’s governor Julio Leon, who’s currently in quarantine with coronavirus, told CNN the governor’s office was aware of the signs displayed in Guama, but did not elaborate if Duque faced any censure from local authorities. They also said they would get back in touch with a response, but that hasn’t happened so far.

Late on Wednesday night, the Venezuelan attorney general Tarek William Saab announced an investigation into Duque’s actions, calling them “macabre” and not sanctioned by the Venezuelan government. Saab confirmed to CNN Duque was under investigation but said he could not comment on the ongoing case. The attorney general took several hours to intervene in the situation, and when he did so, social media was in flames around the issue.

The two mayors are not alone in ordering drastic measures in an attempt to contain the virus. Embattled President Nicolas Maduro himself has taken the extreme step of ordering that all potential Covid-19 cases be hospitalized either in local hospitals or quarantined in ad-hoc facilities at hotels and recreation centers.

On Thursday morning, however, at least one of the Covid-19 signs displayed in Guama had been removed Narvae told CNN, describing it as a small sign of defiance. “The mayor wants to give the impression of control, but people are not okay with it,” he said.

CNNE’s Osmary Hernandez in Caracas and journalist Keren Torres in Barquisimeto, Venezuela, contributed to this report.

Nurses understaffed by the hundreds at UofL Health, traveling options to blame