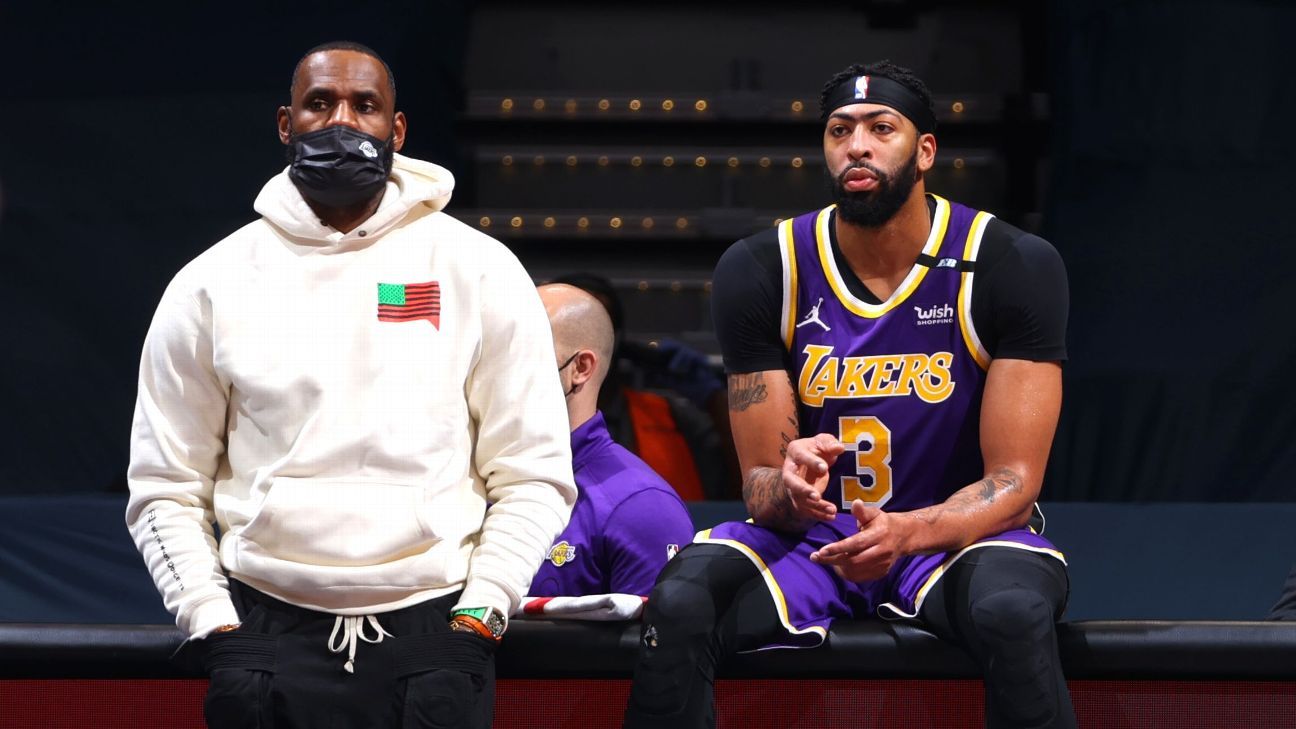 When it was over Wednesday night, after Anthony Davis‘ “must win” declaration in Washington ended with a 116-107 loss to the Wizards, the Los Angeles Lakers‘ star big man stayed on the bench for a bit pondering his team’s predicament.

After Davis missed nine weeks with a calf strain and Achilles tendinosis in his right leg, L.A. has had a failure to launch since his return. The loss to the Wizards dropped the Lakers to 1-3 with Davis back, stumbling in the standings and now holding just a 1½-game lead over the No. 6 Dallas Mavericks and a two-game lead over the No. 7 Portland Trail Blazers with 10 games left in the regular season.

The Wizards, winners of 10 out of 12 coming into Wednesday, took control of the game in the second and third quarters, outscoring L.A. 59-42 in the middle frames.

Washington pushed the lead to 19 with 9 minutes, 11 seconds remaining in the fourth quarter, before the Lakers showed a bit of the desperation Davis was alluding to.

With Davis shifting to center — the position he often manned during the 2020 postseason en route to the NBA title — the Lakers were able to cut Washington’s cushion to nine with 5½ minutes left, but the deficit quickly ballooned back to 16 with a 12-5 Wizards flurry.

Davis scored 14 of his 26 points in the fourth, while shooting 5-for-8 from the field. Although it wasn’t enough to get the win, it was a brief glimpse of the player the Lakers have been accustomed to since trading for him in the summer of 2019.

The quicker Davis can get back up to speed the better, because LeBron James is close to returning from a six-week absence of his own because of a high ankle sprain.

As brilliant as James has been in his career, he is still 36, playing in his 18th season and trying to get back on the court for crucial games with a couple of brand-new teammates. And he hasn’t played a lick in a month and a half.

Anthony Davis tries to block Rui Hachimura’s dunk but fails as he gets posterized and takes a shot to the face and ends up on the floor.

Andre Drummond, one of those new players, along with Ben McLemore, insisted that James’ integration will be seamless.

“I don’t think my brain can process what opportunities will come from [James] being on the floor,” Drummond said after putting up 17 points and 11 rebounds against the Wizards. “Right now, we can’t control him being in there; we’ve got to worry about the guys that are playing right now. So, we’ve just got to worry about building chemistry with them, and when he does come, I’m sure great things will happen for everybody.”

Lakers coach Frank Vogel wasn’t interested in rehashing the loss that saw the Wizards outrebound L.A. 50-41 and shoot 52.2% from the field.

“We’ve just got to look forward,” Vogel said. “We’ve got six out of our next eight at home, seven if you count the Clippers game, and we’ve got to put this trip behind us and continue to work on what we’re doing.”

James could be back for that Clippers game — if not sooner — for L.A.’s final push before the postseason.

And in 3½ weeks, the playoffs will begin, whether the Lakers are ready or not.

The European Super League: what can Boris Johnson do about it?